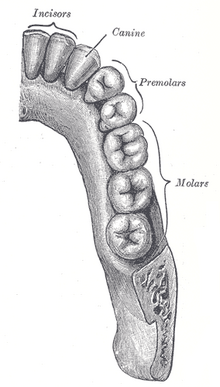 There are four different types of teeth.

The incisors at the front of the mouth have a sharp biting surface and are used for cutting or shearing food into small chewable pieces. There are eight incisors in both primary and permanent dentitions.

The canines are situated at the 'corners' of the dental arches. They have a sharp, pointed biting surface. Their function is to grip and tear food. There are four canine teeth in both primary and permanent dentitions.

The premolars, unlike the incisors and canines, have a flat biting surface. Their function is to tear and crush food. They are unique to the permanent dentition which has eight premolars.

The molars are the largest of the teeth. They have a large flat biting surface. The function of the molars is to chew, crush and grind food. There are eight molars in the primary dentition and twelve in the permanent dentition.

Among deciduous (primary) teeth, ten are found in the maxilla (upper jaw) and ten in the mandible (lower jaw), for a total of 20. The dental formula for primary teeth is 2.1.22.1.2

In the primary set of teeth, there are two types of incisors – centrals and laterals, and two types of molars – first and second. All primary teeth are normally later replaced with their permanent counterparts. 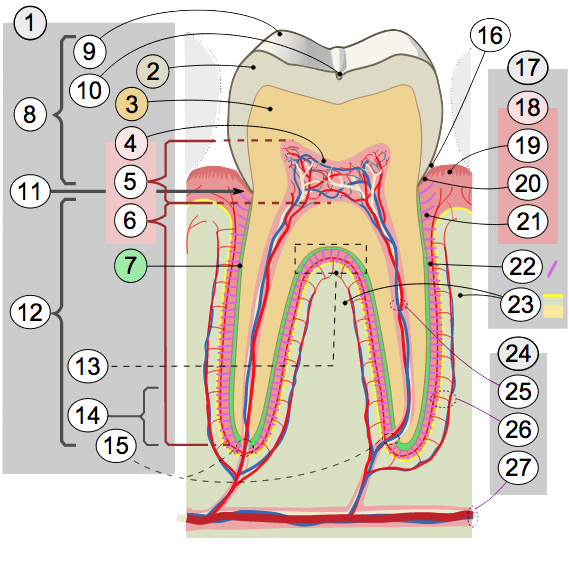 Retrieved from "https://dentistry.fandom.com/wiki/Teeth?oldid=3084"
Community content is available under CC-BY-SA unless otherwise noted.